Richard North, the talented thrower from the South of England joined Red Dragon in 2017 facing his first ever televised games, which he has taken in his stride and learned more at every opportunity. With a rock-solid throw and a hunger to match North is aiming high with his career that started by playing with his Mum. Richard said "I played fun darts for years, and only got serious when I started beating a few decent local players. Then after that having a go at Q-School things happened really rapidly and all of a sudden, I'm playing on TV which is mad but great. When I joined Red Dragon, I knew what darts I wanted as my old set were nearly perfect and I've stuck very closely to that old design, but with a beautiful modern twist. My new darts still have the subtle rear step effect that means I can hold the darts in exactly the same place every time, but now they have a really modern gripped front and colour scheme - and I love them." Richards darts are completed with the latest NITRO Tech shafts and Hardcore flights. 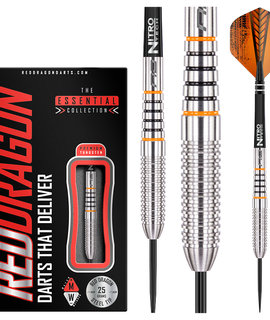